America is home to about 16 million individuals over the age of 75 years. Four million of those are over the age of 85 years. This population has lived through the Great Depression, World War II, the Korean and Vietnam Wars, the assassinations of John F Kennedy and Martin Luther King, the first steps on the moon, and many technological advances. The knowledge and wisdom I gleaned from those afternoons on the porch swing sent me on a mission to reclaim the conversations I was so desperately craving. These are the stories of real people. These are the lessons for a life well-lived. 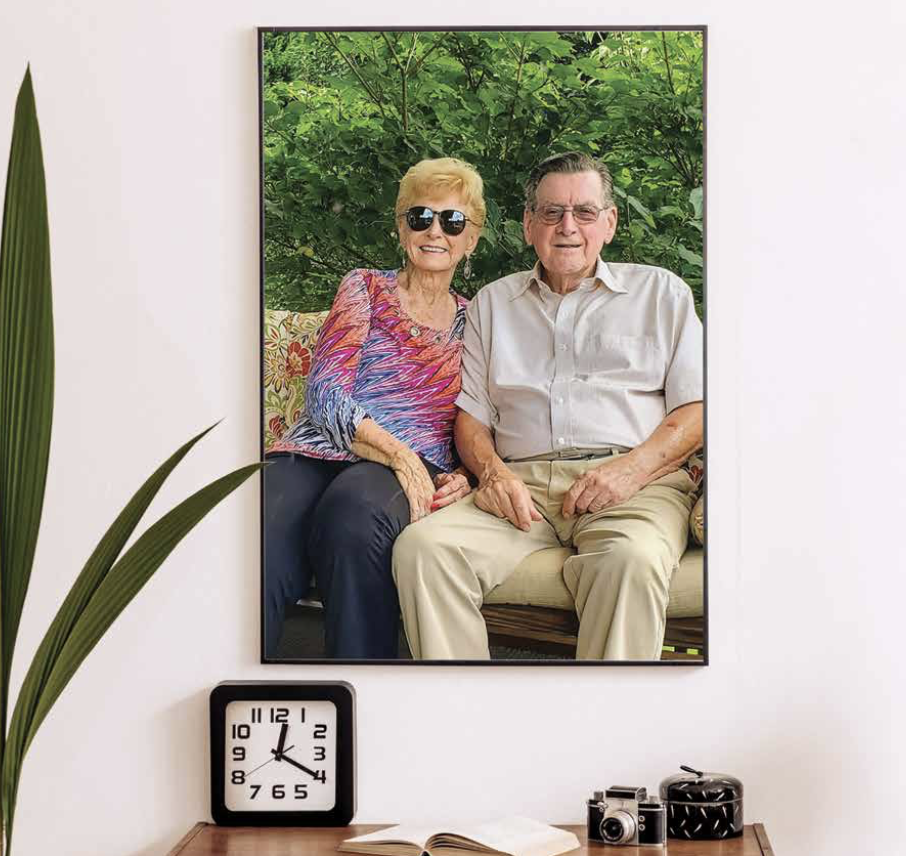 In the 1930’s, Pahokee, FL was the “Winter Vegetable Capital of the World.” Situated to the south of Lake Okeechobee, the town rose (and fell) on the economical wave of agribusiness. “The Muck,” a rich soil produced by the partial draining of The Everglades, was black gold for a farmer, and many residents relied on the income of harvests, the needs of the laborers, or the railroad that carried Florida produce to northern markets day and night. Lee and Pat speak fondly of their hometown. Married when Pat was just 16 years old, they ran a grocery store and rented rooms to laborers. It was honest work. Lee worked hard to provide for their growing family. Then, they lost everything.

A tornado ripped through Pahokee in 1958 leaving life in shambles for many. Lee and Pat were amongst the unlucky. With a 6 yr. old son and a 3 yr. old daughter, they moved in with her parents and started from scratch. “You just did what you had to do,” Lee said. “We had a strong foundation in our faith. That’s carried us through a lot over the years.” Another financial hit came just a few years later. Their youngest child (of 3) was admitted to the hospital with osteomyelitis, a bone infection. With surgeries, medications, and a long stay, the financial burden seemed insurmountable. And that was to say nothing of the possibility they would lose their baby. Their faith carried them through again.

As the political unrest of the 60’s created tensions in their small town, The Wroten’s felt called to move to Lakeland. They immediately found a church and got to the business of building life. “God is good,” says Pat over Facetime. I know she’d put her arm around me if I was on the front porch with her. I can’t help but wonder if all this strife was the planting of a seed in her heart. Pat went on to become a Music Evangelist at 50 yrs. old traveling the world with Southern Baptist Evangelism. She sang and taught the women about the Bible. “I can’t imagine how I would have made it through without prayer,” she adds. “When you find Christ, you find yourself.” 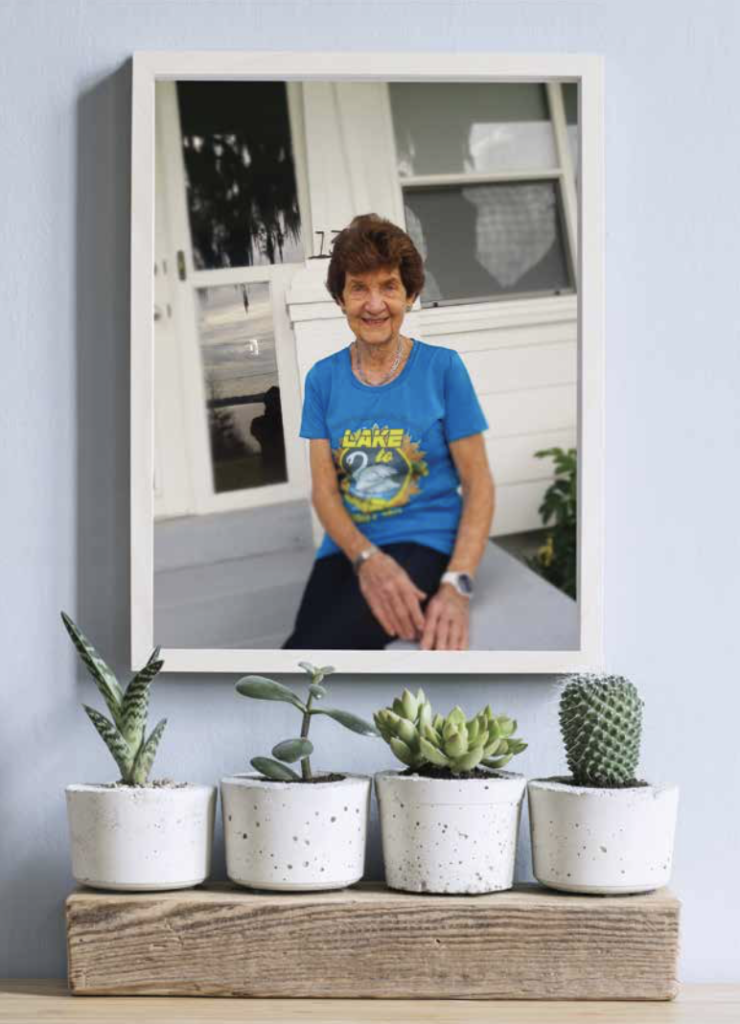 The University of Tampa was an exciting place for 17 yr. old Alabamian, Nanette. It was 1953 and she had come to Florida to earn a degree as a Home Economics Educator. During college, Nanette worked two evenings a week at the Tampa Electric Company Leisure House teaching women, who came free of charge, how to use electrical appliances. The company was pleased with their young Home Economist and sent Nanette to a new territory in Winter Haven. That’s where she met Connel Wade Rodgers, a WWII veteran. She can’t help but to smile when she talks about him. He, too, could not resist Nanette’s infectious positivity. Eight months later, they were married. A year later, when she became pregnant with her first child, Nanette resigned from her job. “It was just what you did back then,” she shrugs.

Connel and Nanette Rodgers worked for the Polk County School System as teachers and administrators. She went on to get her Master’s Degree in 1975 and Doctorate in 1980. Dr. Rodgers served on the State Coordinating Council for Early Childhood Services and as the director for Home Economics Education for the Florida Department of Education. Nanette recounts the stories of teaching with such joy. “I know the students came into the classroom unsure of me. I wanted them to know I was there for them. I wanted the best for each and every one.”

Nanette is for everyone though, just ask her running partners. At nearly 85 years old, she runs the streets of Lakeland and Winter Haven. She ran the Disney Marathon this past January 2020. She just keeps moving… and smiling… and encouraging every single person she meets. “No matter the situation, I am kind. I can talk to people and be a good neighbor. I can listen and be grateful. When I wake up, I just decide TODAY is going to be the best day ever!” 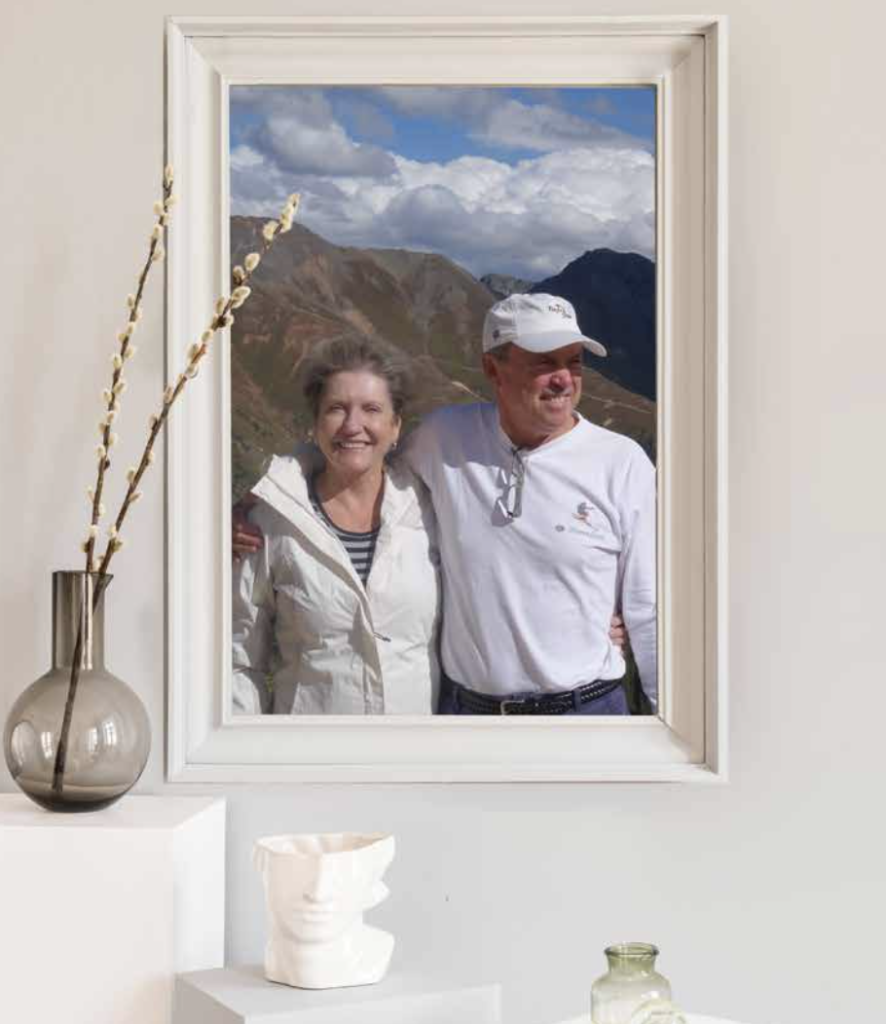 Bob and Diane Holmes chose adventure when they chose each other. A second marriage, they combined a total of 5 sons aged 6-14 yrs. old. It was 1979 in San Marcos, TX at Texas State University. Diane was teaching Foods and Nutrition and working on her doctorate. Bob was the Department Chair of the Business and Marketing Departments.

“The kids thought they were having a giant slumber party,” Diane laughs. She knew she had signed up for a direction change, and the next years would be filled with them.

Bob accepted the position as Dean of the College of Business at James Madison University in Harrisonburg, VA. They packed up the family and fell into a life filled with all the moving parts of a family of seven. While maintaining her professional path didn’t seem the best choice for Diane with the demands of their family, she quickly saw that volunteer work allowed her to stay involved with more flexibility. Harrisburg was home and the Holmes family stayed rooted for 12 years.

Diane wasn’t so sure about moving to Wellesley, MA in 1995 but Bob had a job as the Dean of the School of Business at Babson College giving him a schedule and purpose and social obligations. She found new places to volunteer in nearby Boston, and the two quickly fell in love with New England. “We built our dream home!” Diane exclaims. She looks over at Bob. Even today, he ducks his head with a sheepish grin. “He took a job as the Business Dean at the University of Alabama in Birmingham!” And so, they moved.

As they neared retirement, the couple built their final home in the mountains of Eagle, CO. Bob retired in January 2009. He flew to be with Diane and enjoy his first ski season as a resident. But less than a month later, Florida Southern College called. They hired Bob as a consultant and accepted a one-year position as the Head of the Business Department.

“You have to be ok with being out of your comfort zone.” They say it almost in tandem and I laugh. At 79 yrs. and 75 yrs., respectively, Bob and Diane chose to push the edges of what made them comfortable.

Written upon the tattered pages of the Book of Life are the stories of strife and the tales of triumph that define an era. Perhaps more importantly, the human experience is dotted with opportunities to overcome and grow, to connect and create, to endure and embrace. These themes weave through the words giving us the greatest gift of all- hope.  And it is hope that anchors the soul.

Click here to view this article within the digital issue, including all photography!