Have You Heard About Florida’s Elephants?

And they love bath time.  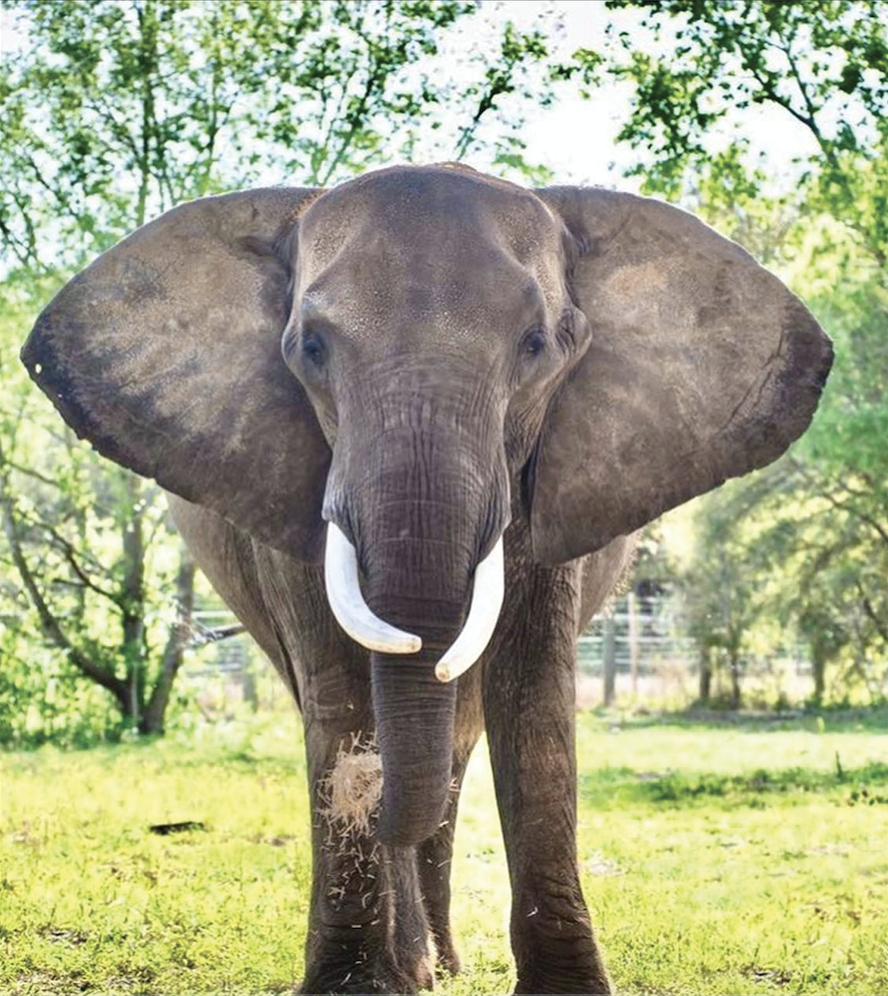 Lou is the boss. Shipped to Miami from Zimbabwe when she was a year and a half old, the 36-year-old African elephant was orphaned by ivory poachers. She’s the youngest of the three elephants being cared for at the Myakka Elephant Ranch, but she’s been with the Barreda family the longest, and she’s the most confident and serious. That doesn’t mean she doesn’t enjoy snuggling up for a trunk hug, though. When she’s feeling especially relaxed, she purrs like a cat. It’s a sound that only African (not Asian) elephants can make due to differences in the structure of their tongues. And only about one out of every seven African elephants will do it, so it’s a pretty special thing to get to hear it.

Forty-six-year-old Carol eyes ranch founder Lou Barreda before leaning in for a trunk pat. She’s more emotional than the others. An Asian elephant, she has far smaller ears than Lou (yes, man and elephant share the same name—both were named after Lou’s grandfather). She’ll flap them excitedly and squeal a greeting to a favorite human whom she hasn’t seen in awhile. Carol and Patty (the third member of the trio) grew up on the same farm in Thailand and worked together in show business, appearing in Smokey and the Bandit II as well as at state fairs, circuses, and traditional Indian weddings. 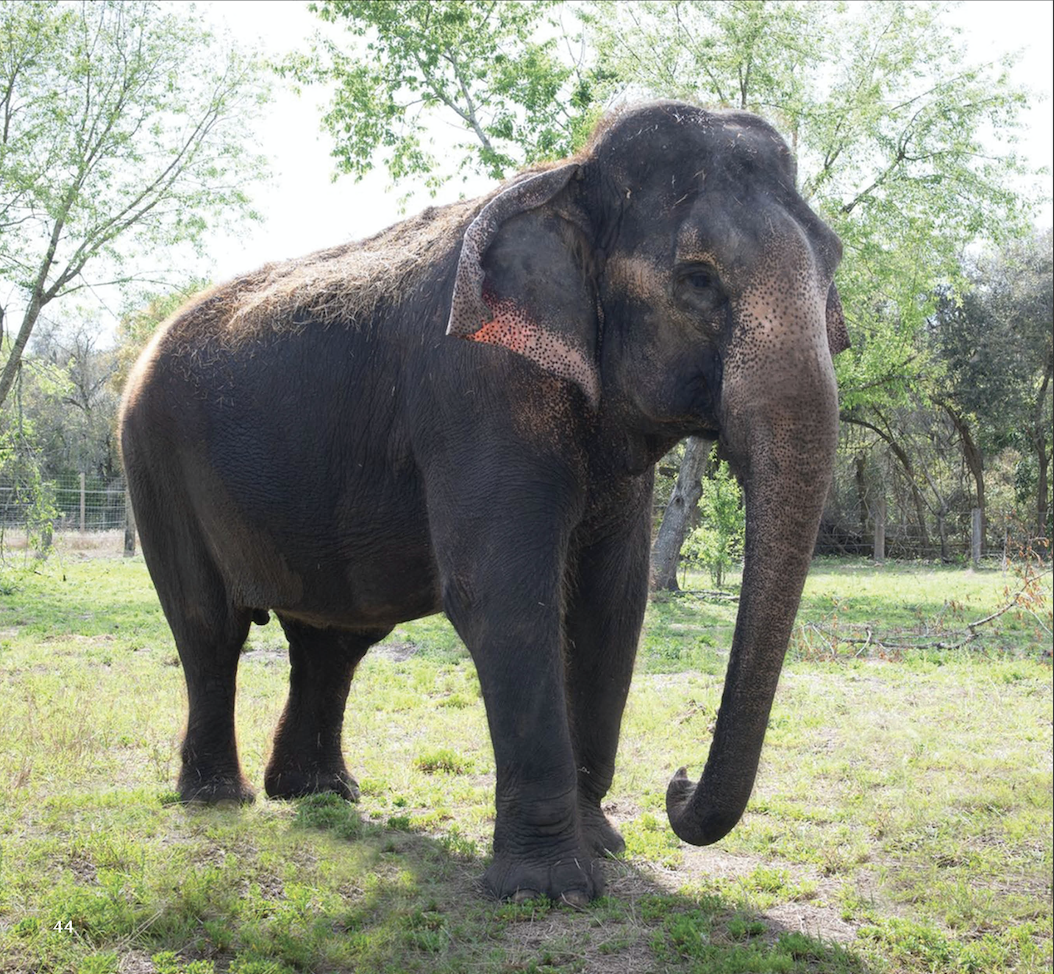 Patty, also 46, is taller and leaner than Carol, and very much likes her routines. Today, she was scheduled for an afternoon bath and took her spot in the breezy pole barn to be hosed down, sprayed with special moisturizing soap, and scrubbed from top to tail with long-handled brushes by the participants in the afternoon “Elephant Spa Encounter” group. When it was time for her pedicure, she dutifully lifted one front foot at a time onto a stool so visitors could paint a moisturizing solution on each of her enormous toenails.

We have elephants in Florida? First I’ve heard of it!

If you haven’t heard of the Myakka Elephant Ranch before, you’re not alone. It only came into existence in 2019. Lou Barreda had just finished up a marketing degree at Florida Gulf Coast University. Growing up alongside Lou the elephant, Lou the boy developed a passion for elephant education and conservation. By combining his love for these intelligent creatures with his knowledge of business and marketing, he was able to create the Myakka Elephant Ranch, a non-profit, family-run conservation and education center where the public can interact with these majestic animals in a special way they might never be able to otherwise. 

During the VIP experience, visitors, including Kim and Henry Martin, their daughter Tyler Concepcion and their granddaughter Alexis Concepcion, chopped up vegetables as a treat for Lou and Carol. The elephants eat 200 pounds of hay per day as well as grass and tree branches, but the fruits and veggies are a treat. Each person held out an apple or other piece of fruit on the palm of their hand, and an elephant gently accepted it with a nimble pluck of their trunk.

Meanwhile, Lou pointed out the differences between African and Asian elephants. African elephants have two “fingers” on their trunk, while Asian elephants only have one. That means that Lou can actually pinch a piece of fruit out of a person’s hand while Carol uses a different, twisting motion.

“Asian elephants have smoother skin and sometimes this freckled appearance,” Lou explained. “And they have two to three times as much hair. They are actually more related to the wooly mammoth than they are to the African elephant.” He pointed out more differences, including that African elephants have saggier, wrinklier skin and that the African females have long, impressive tusks while Asian females have much shorter tusks—so short he had to move Carol’s trunk aside to reveal them. 

In addition to feeding and bathing elephants, each VIP encounter visitor got a chance to go inside the gate and spend one-on-one time with Lou. They pet her, talked to her, and felt the soft skin behind her ears. All the time, Lou purred away, clearly relaxed and at ease with the entire experience.

The entire ranch has a peaceful quality to it. Everything that visitors do is part of normal elephant care, including the bath. “It’s important for an elephant to get a full bath every day,” explained Lou’s father, Jorge, as he ushered visitors into the corral to pick up a hose or a long-handled scrub brush. “By law, it’s a requirement.”

“Does she have any tickle spots?” one woman asked, looking up from where she was scrubbing Patty’s belly.

“No tickle spots,” Lou reassured her.

After Patty’s bath, the group wandered outside to watch the elephants do their normal elephant thing, which included eating hay, hanging out together, and eyeing the 80,000 gallon water hole. Of course, when you don’t have to walk miles to forage for food, elephants, like people, can tend to get sedentary. “We hide fruits in the branches of trees to encourage scavenging and exercise,” said Lou’s sister Julia Braren, COO of the ranch. Sometimes they even throw apples in the watering hole and let the elephants “bob” for them. “It encourages healthy habits,” Julia said.

Besides providing a beautiful, safe, comfortable environment for elephants to thrive (the ranch is currently the seventh largest habitat in the U.S. and the family hopes to expand on that), the mission of the ranch is to support global elephant conservation.

“There are 300 elephants in the U.S. Our entire population dies in three days in Africa, due to poaching,” Julia said. In Asia, the problem is a human- elephant conflict, with both populations competing for resources. “The goal is to create a safe, healthy way for people and elephants to co-exist,” Julia said. Gesturing to Lou, Carol, and Patty, she said, “These elephants are ambassadors to those in the wild.”

Lou has partnered with The Elephant Foundation on global elephant conservation efforts. In March of this year, the Myakka Elephant Ranch presented a $10,000 check to the Foundation and has committed $50,000 for 2022. The money will be used for building anti-poaching ranger stations in Uganda and projects aimed at mitigating the human-elephant conflict in Asia.

Another way the Barreda family is supporting global elephant conservation is by appealing to the next generation through an innovative art exchange program. Elephant lovers on this side of the Atlantic create elephant-themed art pieces, and the best are sent to schools in Africa. The children receive the artwork and send back letters.

“We’re trying to change the narrative for these kids,” Julia explained.

“Unfortunately, elephants are seen as more of a nuisance. Elephants aren’t native to Florida, but there are people here drawing and painting and having a connection with elephants, and the kids are seeing how blessed they are to have that wildlife. Hopefully they won’t become future poachers.” 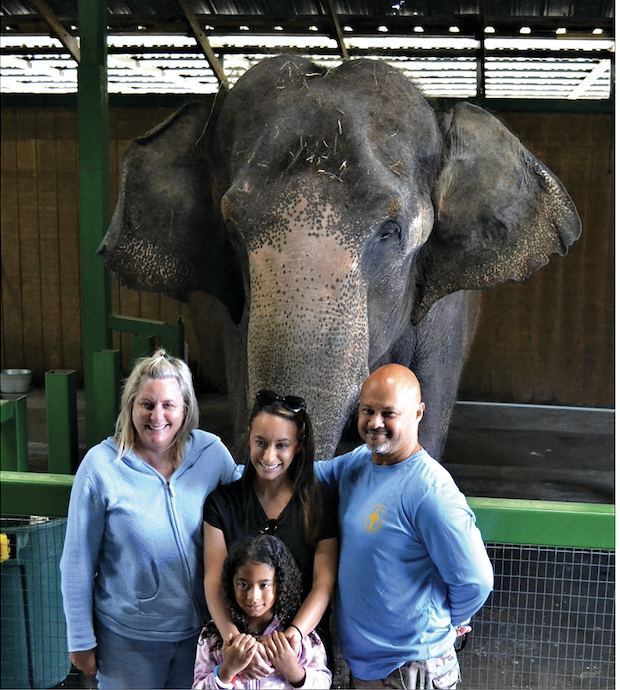 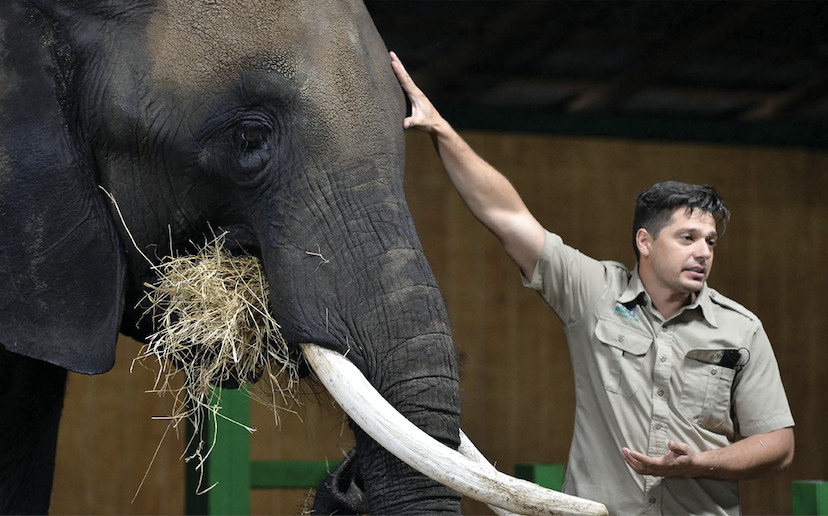 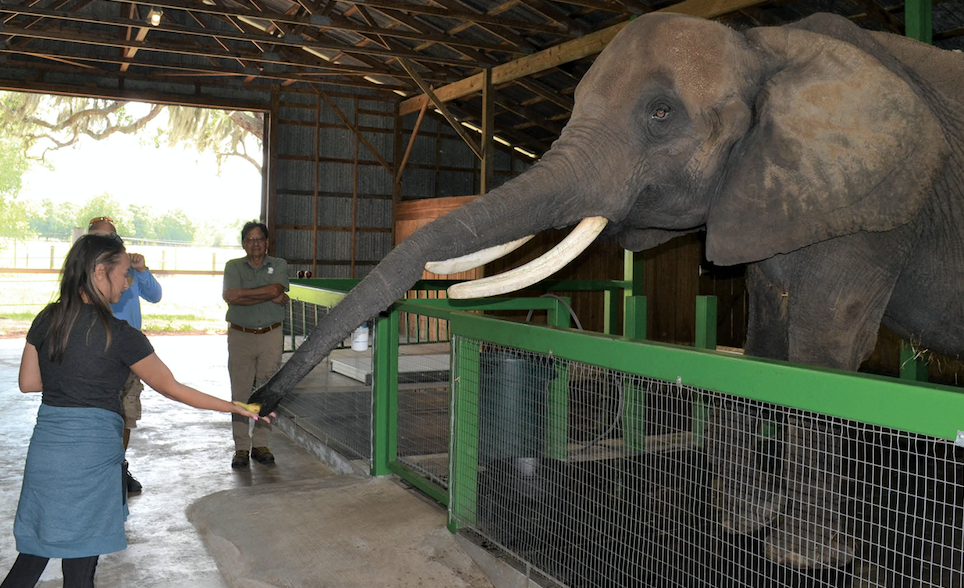 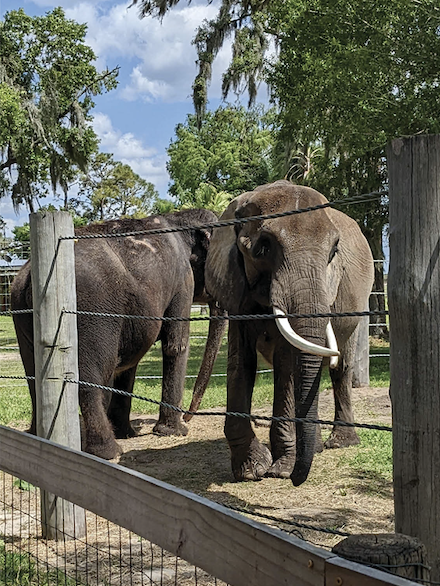 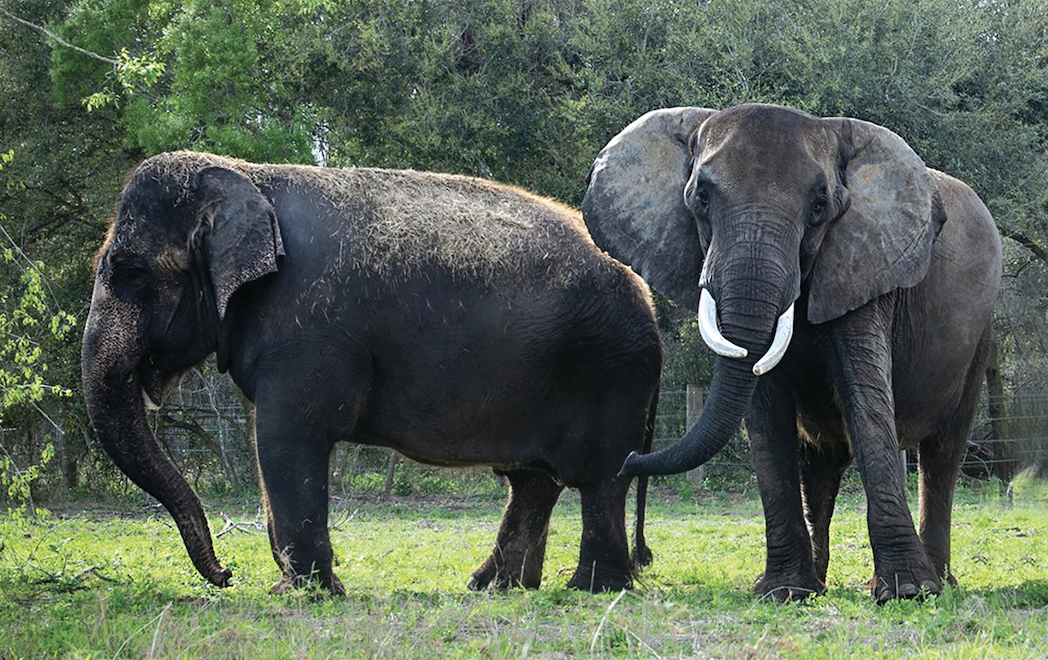 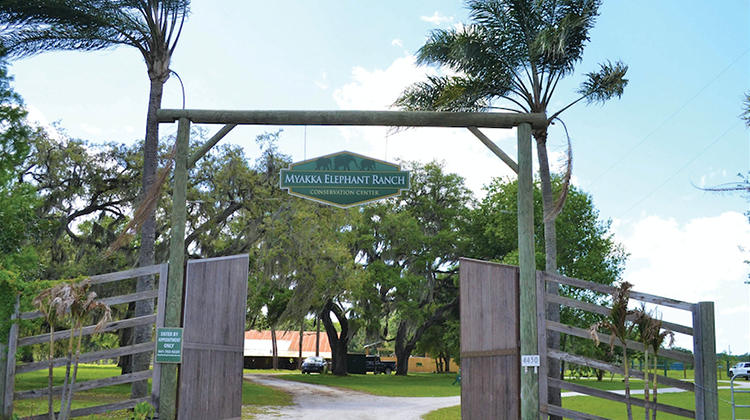 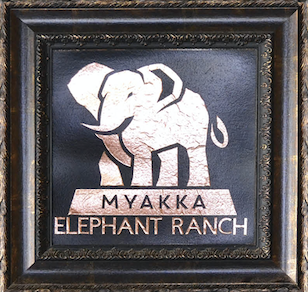