Thirteen-year-old Harley Rae Pryor is living the dream of every rodeo breakaway roper in the country. Harley was the youngest qualifier at the The American Rodeo on March 6, 2022 and competed against some of the best in the world in breakaway roping where she placed an impressive third place.

The American is an annual legendary western weekend that is held each year at AT&T Stadium in Arlington, Texas and represents the richest single-day event in all western sports. Over the course of the qualifier events across the country, competitors will all battle for what the biggest single-day paycheck of their careers could be. Owned by Teton Ridge, The American is a true open competition in format. The iconic event brings together top professional rodeo athletes and honest, hardworking cowboys and cowgirls in a winner-take-all showdown, meant to crown the finest talent the world has to offer. 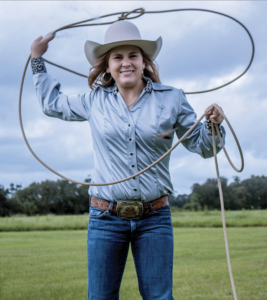 Harley, from Moore Haven, Florida, handled herself with the composure of a veteran contender and champion throughout The American competition, and she has some powerful advice for young ropers who might find themselves intimidated by competing against their idols in competition. “I would tell anybody who wants to make The American, don’t be scared no matter who you have to rope against.” And her talent of breakaway roping at such a young age did not go unnoticed in the big arena.

Breakaway roping is a variation of calf roping where a calf is roped, but not thrown and tied. It is a rodeo event that features a calf and a mounted rider. A light rope is fastened from the chute to the calf’s neck, releasing once the calf is well away from the chute and releasing the barrier, which is used to ensure that the calf gets a head start. Once the barrier has released, the horse runs out of the box while the roper attempts to throw a rope around the neck of the calf. 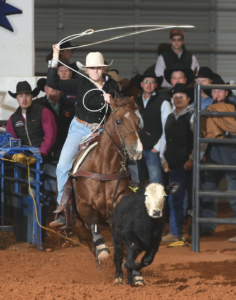 Being a breakaway champion was almost inevitable for Harley. “She’s been on a horse all her life, even before she was born,” says Weston Pryor, her father and coach. “Harley comes from a long line of rodeo family on both sides, which includes my dad and my grandparents. She really didn’t have much of a choice. She didn’t know any different.”

Harley comes from a unique generation of girls. Both her mother and grandmother competed in rodeos. “My mom breakawayed when she was in high school, junior high and college, and my dad bull dogged,” Harley said. “I’ve been into rodeo ever since I was born.”

Harley sat on her first horse at two or three-years-old. She started roping at six, and her first roping competition was when she was seven. Her accomplishments take a team. Weston says he’s just one of her coaches. “We have a team of people from all around the country. From mental to physical training, there have been people in her life that helped her to get where she’s at, including her mother and grandparents. She has one of the best support teams there is.” 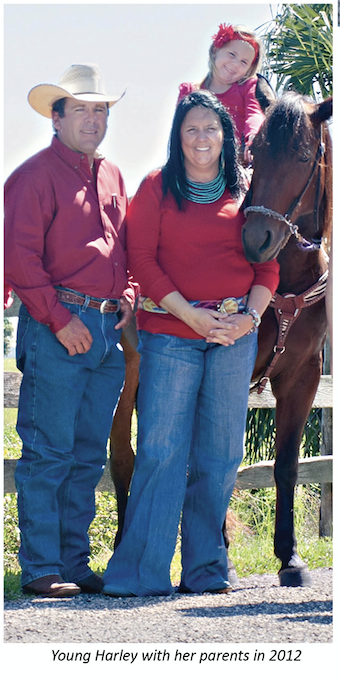 Harley has been a winner from the start. She competes in events around Florida, Texas, Oklahoma, and Las Vegas. Her mother Leslie Pryor says, “I’m amazed at her. She was 11 when she won a truck. She won the 15 and under breakaway and won a Dodge truck. She had won little things here and there, and it kind of went on from there. There are probably 20 saddles she has won and many belt buckles.” Harley competes in some form of roping every weekend in Florida, and then once a month in Texas. She also rides and ropes in the Florida Junior High Rodeo Association events.

The American was a different tournament style than what Harley was used to. It was an open competition, which means anyone can enter. “She was the youngest one in the competition,” Leslie says. “They started out with over 500 competitors. They narrowed it down to the 10. The girls closest to her age were 18 and they were in college. Competition began Feb. 22. They roped two calves and the field was narrowed down to the top 30. There were 300 competitors but only four of those made it to the semi-final round. Harley was one of the four.” 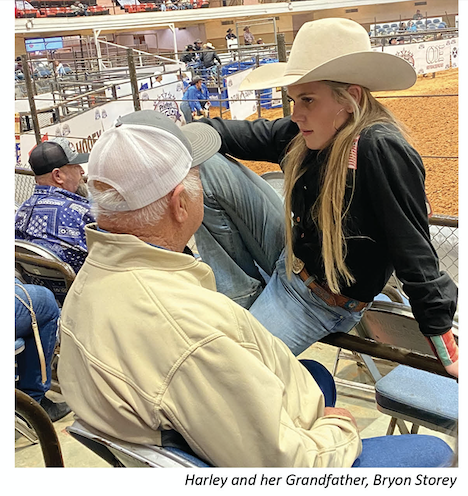 A lot of her success may have to do with her special bond with her horse “Jewels.” Harley said, “Jewels tells me when to rope. She will run in the hole and paddle off, and that’s when I rope. We’ve been partners since day one. I don’t know what I would do without her.”

The same weekend Harley was competing in The American, she was also participating in the Hooey Junior Patriot, where she won the 15 and under breakaway. All in all, she won $65,000 over the weekend.

Both Leslie and Weston lost their voices by the end of the weekend from cheering so much and so loud. Leslie says she’s happy and proud at what Harley has achieved. Leslie says she’s not usually nervous when her daughter competes, but she was nervous for her that weekend. “It was a big milestone. It’s a thing only an elite few will get to experience. I just wanted her to do good.”

Weston also felt the pressure for Harley. He said once Harley went into the arena, the coaching was over, and it was muscle memory that took over. “We’ve been out there since she was seven years old, and it paid off. This is her biggest accomplished so far.”  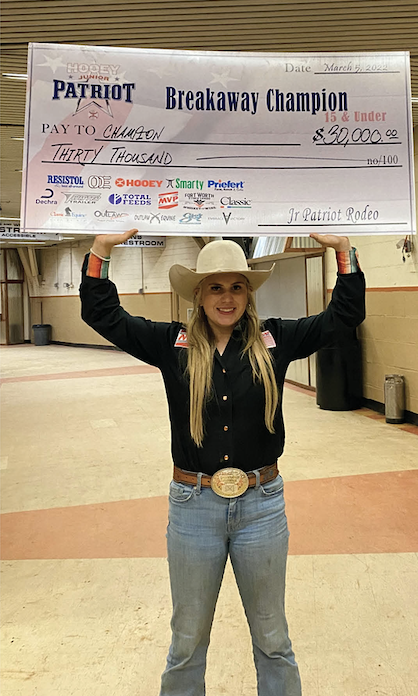 As for Harley, she says she’s just a 13-year-old living every girl’s dream. She’s happy she placed so well, but at the same time, it was just another day of roping. “The crowd was a lot bigger, but I just had to do my job and I did,” she says. “The AT&T (stadium) had a lot more people. You’re standing in the tunnel and there are champions back there. It was a good experience.”

The way things are going, Leslie sees Harley making a career out of competing in rodeos. “It’s a growing sport, that you can now make a living at.” she says. “I see her doing it for as long as she wants to, for years to come.”

Weston is fine with that, but he says there is only one thing that’s more important: “At the end of the day, it doesn’t matter what we win, it’s the quality of the person that we’re trying to raise. That’s our end goal for me and her mother.”

It’s amazing that Harley participated as the youngest qualifier to this year’s The American, but what’s even more amazing is the way she approached it with such confidence. The Florida cowgirl backing into the box for The American Finals Breakaway Roping Short Go, walked away a third-place winner. She is amazing and her proud Florida hometown will see her for many years competing and earning rodeo win after win. 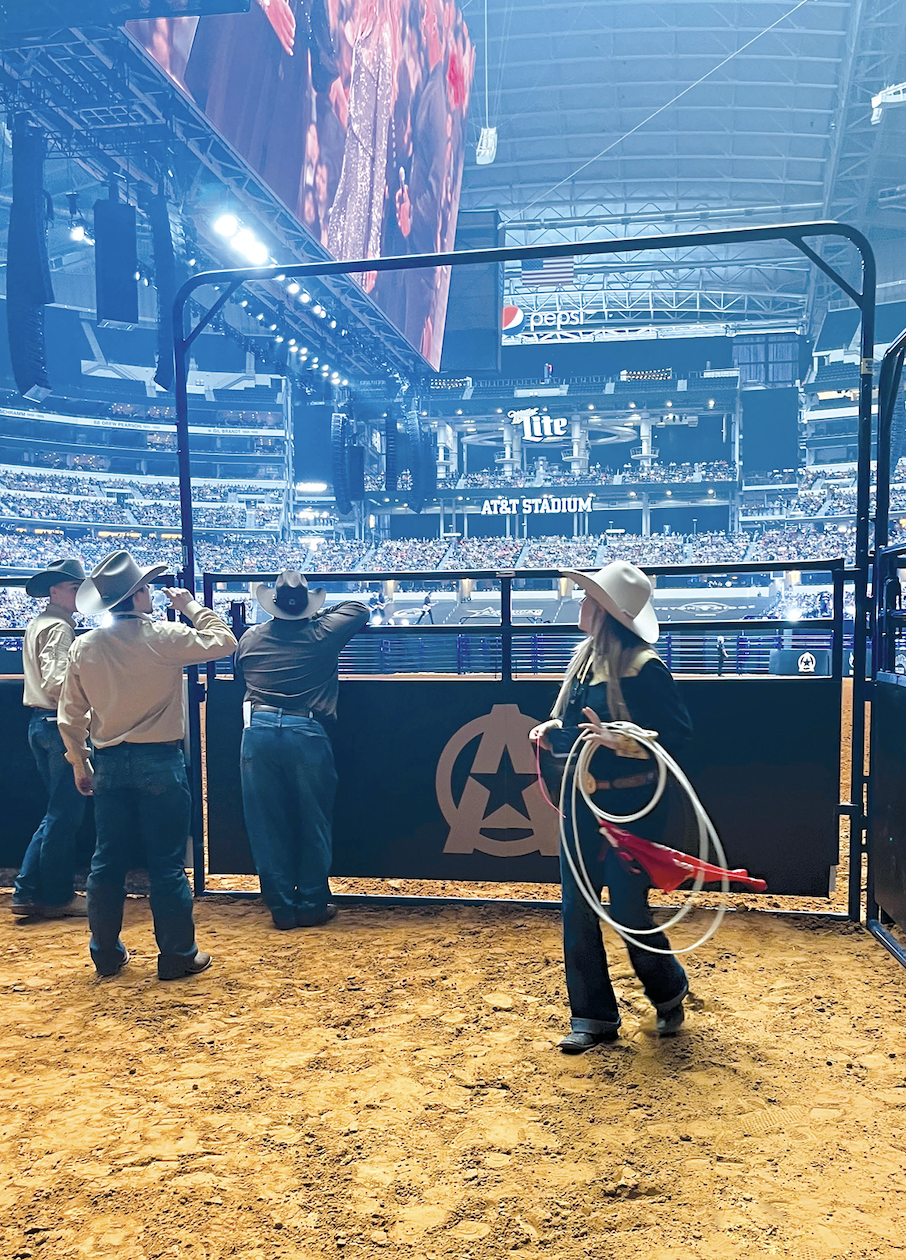