Our Experience at the Lakeland Food Truck Rally

It’s the dog days of summer, and the teens are bored and bingeing on Neflix and Doritos. What do you do?

If you haven’t dined on food truck fare yet, you’re in the minority. The modern food truck revolution started in 2008 due to economic uncertainty and has continued to thrive year after year. According to Zippia Career Research for 2021, there are over 35,000 food truck businesses in the U.S., making it a $1.16 billion industry. We’re living in an age of food trucks, and we’re here for it!

We pile into the car and head out to the Lakeland Food Truck Rally, held year-round the second Thursday of the month from 5:00PM to 9:00PM in Munn Park. This trendy part of downtown Lakeland is the perfect location for an evening of foodie fun.

But before we get to the eating part, let’s meet your food critics. 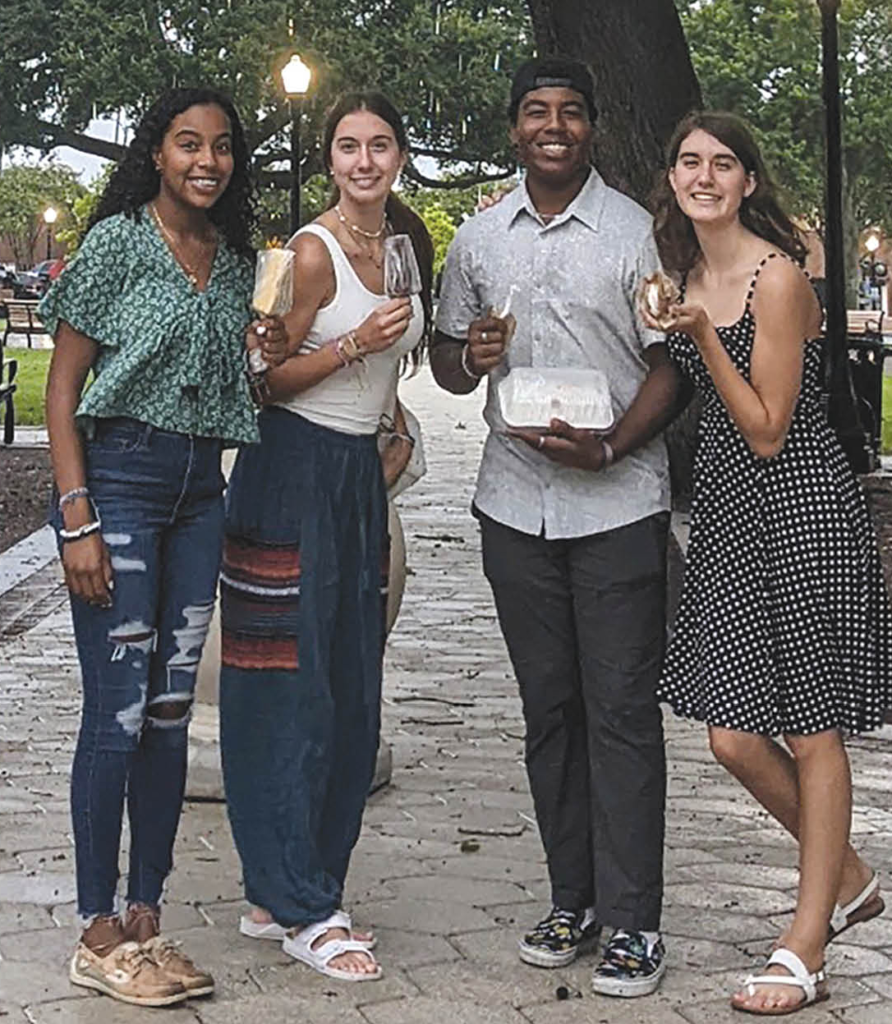 Colombian street food with a twist!

It’s a blustery evening with grumbling gray clouds threatening, but that’s not enough to keep hungry teenagers away from a park square lined with food trucks! The first one we hit is Chikiz Empanaditas Gourmet run by Roberto and Jennifer Arciniegas. They serve authentic Colombian cuisine with a gourmet twist.

“My mom was a chef,” Roberto explains. Four years ago, when they were brainstorming ideas for the business, she told them exactly what they needed to do. The Winter Garden-based couple started selling empanaditas (mini savory Latin-American turnovers) at farmer’s markets. Their first event was such a hit, they invested in a food truck a few months later with the goal of making Colombian street food accessible to all Floridians.

“We want to continue a family tradition and create a new Colombian street food, and also educate people about our food and our country,” Roberto says.

He recommends the arepas nachos and the megapatacon, and we’re eager to try them both. The arepas are homemade cornmeal patties cut into triangles and deep fried to a nice crunch. They are topped with pico de gallo, sour cream, Monterey jack cheese, grilled corn, a garlic cilantro aioli sauce, and tons of fresh lettuce. For a protein, you can choose from chicken, chorizo (a flavorful Colombian sausage—not spicy like the Mexican version) or carnitas (pulled pork).

The megapatacon is a base of what many Cuban food lovers know as tostones (twice-fried green plantain patties). Roberto adds a little bit of salt and melted cheese, then loads them with lettuce, mozzarella cheese, grilled chicken, carnitas, chorizo, and the garlic cilantro sauce. He tops them with potato sticks for that little crunch and adds “mayoketchup,” a combination of mayonnaise and ketchup that he says you’ll find at every table in Colombia. “It’s a super Colombian-style dish,” he says.

I’m struck by the freshness of the dishes and the aromatic cilantro undertones. I’m thinking this truck has earned the “gourmet” in its name. It’s hard to get a critique from teenagers who are wolfing down their dinner, but here’s what they have to say: Kira

“This chicken is so good!”

“The meat is very tender and has an authentic taste.”

“The presentation is very nice. I’m a picky eater, and I would eat this whole thing!”  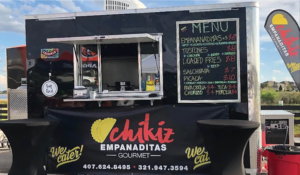 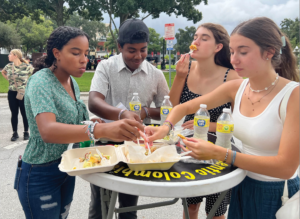 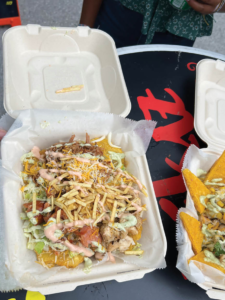 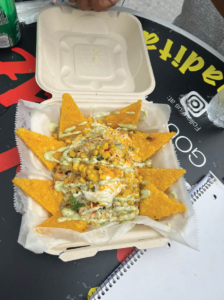 Next we took a dessert break and got a taste of the small-batch, hand-dipped ice cream at MyCone Creamery run by Andrew and Traci Hession and their 22-year-old son, Will. Traci greeted us at the window of their friendly-looking turquoise refurbished church bus with a big smile. The family is originally from Michigan but moved to Trinity two years ago when Covid took away Andrew’s job. He’d been wanting to own an ice cream shop for a while, and when Traci agreed this was the right time, they made their move. The Hessions decided to go mobile so as not to be tied down to a location.

“There’s a steep learning curve, but it’s been so much fun. We feel that God called us to do this,” says Andrew, a former salesman.

Their long-term goal is to churn their own ice cream, but for now they have it made at a local creamery. Because the ice cream is made in three-batch gallons, it’s creamier than most and more like homemade. They rotate through twenty flavors including the very popular Kahlua Chip made with espresso powder, toffee chips, and chocolate chips and the Cookie Monster made with vanilla ice cream dyed blue with cookies and cream and cookie dough mixed in. Their award-winning vanilla, the base, took second place nationally.

They are also the place to go for cold brew coffee and iced tea. “I searched high and low for a coffee bean,” says Andrew. “I get it from a roaster in New York. It’s the smoothest iced coffee you’ll ever taste.”

All the teens had high praise for the ice cream.

“Normally I’m not the biggest vanilla person, but the texture is so creamy!”

“It’s super creamy ice cream.
The best part is it has a good strong mint flavor.”

“This is literally the best ice cream I’ve ever had.”  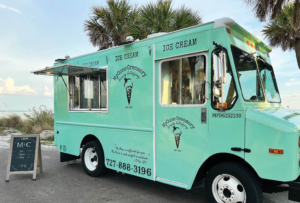 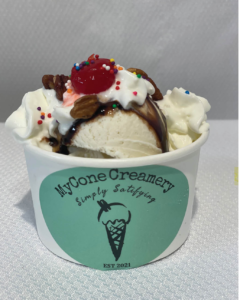 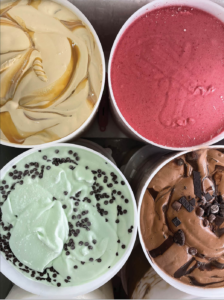 Where Elvis makes a regular appearance

Next, we go for some traditional American fare at 1 Up Burger. The colorful truck belongs to Michael Friend and his girlfriend Tammy McCarthy. The couple moved down from Michigan two years ago after Covid shut down their pawn shop business. With help from Tampa Bay Food Trucks (the company who organizes this rally and many other opportunities for food truckers), they purchased, branded, and outfitted their truck.

It was a big leap of faith for the pair, who both worked in food service when they were younger. “We sold everything we had. We used our entire life savings to do this,” Michael says. Now, based out of Port Richey, they feature burgers, chicken strips, and fries. Everything is fresh, never frozen, Michael tells me. “If they don’t like it, I’ll make them anything they want on the menu, guaranteed,” he adds.

Of course, we’re here for adventure, so when I ask what we should try and Michael tells me “the Elvis Burger,” I already know we’re in. It’s a quarter pound patty with sharp cheddar cheese, bacon, honey, and peanut butter.

I think I may have misheard him, but no. It really does have peanut butter. He got the recipe from a fellow food trucker who had it on their menu and raved about it. “I was like, no way. I took a bite out of courtesy and said, ‘Can I put this on my truck?’’” Michael recalls.

I have a similar reaction. The peanut butter adds a certain je ne se quoi to what is basically a great bacon cheeseburger. But I’ll let our taste testers tell it.

“Somehow the flavors go together.”

“I have the same feeling as when I first put a fry in my Frosty.”

“I’m sad I haven’t tried peanut butter on my burger before.”  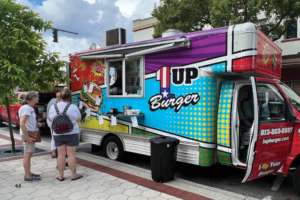 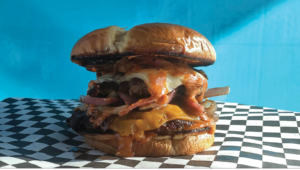 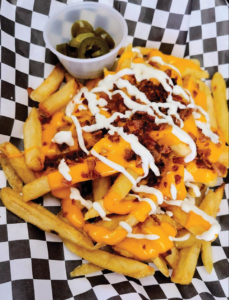 We’re not ashamed to go for a second dessert, even after the rain starts coming down. Dodging raindrops, we hurry across the square to the bright pink 1974 Ford P350 owned by Polk County resident Lea Williams. Williams used to run a candy shop called Got Candy just down the street on Kentucky Avenue, but switched her business to a full-time food truck gig in May of 2017.

Lea and her daughter, Lyn Hayes, love the flexibility of having a mobile dessert truck. They aren’t tied to one location, the cost of doing business is lower, and they can close for vacation if they want to. “With the food truck we can go to our customers. We can do events; people love events. A food truck is something that is fun and different.”

Got Desserts features a number of sweet treats, including cheesecake on a stick dipped in your choice of hard coating like an old-fashioned soft-serve cone (choose from chocolate, white chocolate, cherry, or one of several other flavors Lea rotates through, including birthday cake, blue raspberry, peanut butter, or cotton candy). The Cheesecake Cookies are cheesecake sandwiched between two home-baked cookies, half-dipped in chocolate and frozen. You can get a mini Ice-cream Cake that feeds two.

The Carrot Cake is always a fan favorite, as is the brand-new Cobbler Cone—a warm scoop of fresh-baked blueberry, peach, or pecan cobbler placed in a waffle cone and topped with ice cream. The portions are generous, too!

Here’s what our taste tasters had to say:

“If I knew this existed, I would have had this as my birthday cake.” –

Chocolate-dipped Cheesecake on a Stick
Kira

“I love cheesecake, and this rates very high on my list!”

“It’s honestly phenomenal. I want another one.”

“The whipped cream is super light and fluffy. It’s sweet and refreshing.”

They also offer fresh, real lemonade optionally flavored with home-made syrups like blueberry, strawberry, or watermelon. “I love my job,” Lea says. “I get to have fun with what we do and offer things with a little twist.”   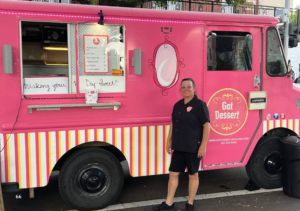 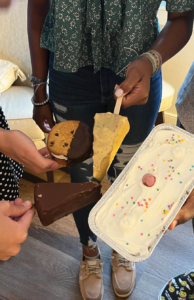 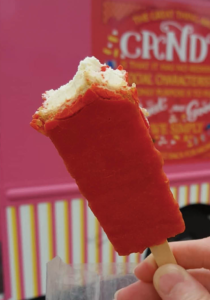 Next time we visit a food truck rally, we’ll try some different fare. If there’s one thing I’ve learned about these food truckers, they love adding new things to the menu. Do you have any food truck tales? Feel free to share them on our Facebook page at www.facebook.com/Heartlandlivingmagazine. 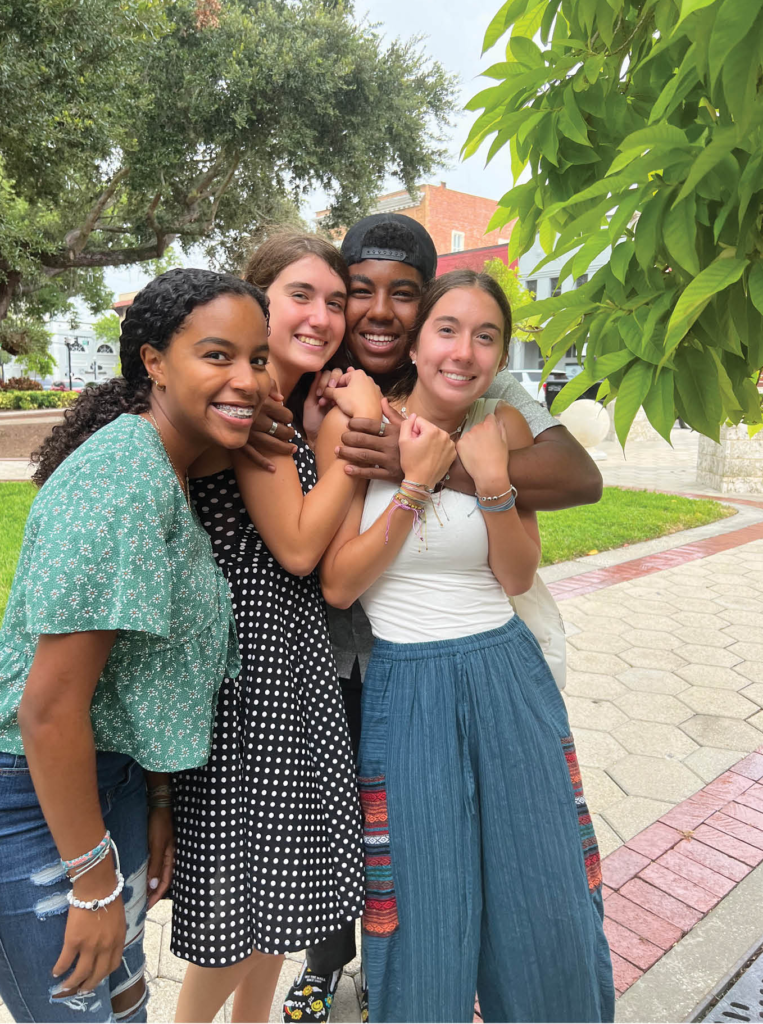