Since the fall of 2014 when he snapped that photo of Emily Angell (now a fish and wildlife biologist with the U.S. Fish and Wildlife Service), Dustin has taken over a hundred portraits of individuals linked to conservation in the headwaters region of the Florida Everglades spanning Orange, Osceola, Lake, Highlands, Glades, St. Lucie, Martin, and Polk counties.

Many of his subjects are employees or interns at Archbold Biological Station, a research institute in Venus, Florida, where he works as director of education. But he has also photographed conservation workers from across the state, artists, state biologists, a cattle rancher and more. His almost life-sized portraits of these people working in their element have stared out at audiences at Bok Tower Gardens, the Gillespie Museum at Stetson University, the Peter Powell Roberts Museum in Avon Park, and SFSC’s Museum of Florida Arts and Culture, providing a visual celebration of the people protecting the state’s ecology from behind the scenes.

“Photographers have done this with many subcultures. After moving to the area in 2012, I found myself incorporated into a community built on science and conservation. And these people made up not just my professional network, but almost my entire social life, too. I felt that because of my photography skill set and access to their world, I had a responsibility to future generations to document their stories,” Dustin said.

Dustin’s portrait style was inspired by the art you might see in a European history book. “They are modern, secular versions of Renaissance saint depictions,” he explained. The format is consistent: portraits of people looking directly at the camera, holding an item that represents their story. Like in those early portraits, which were not of kings or queens but rather regular folk who did extraordinary things for what they believed in, the Florida Stewards project tells the stories of everyday people doing the work of conservation in Central Florida. 

Here are a few of those stories… 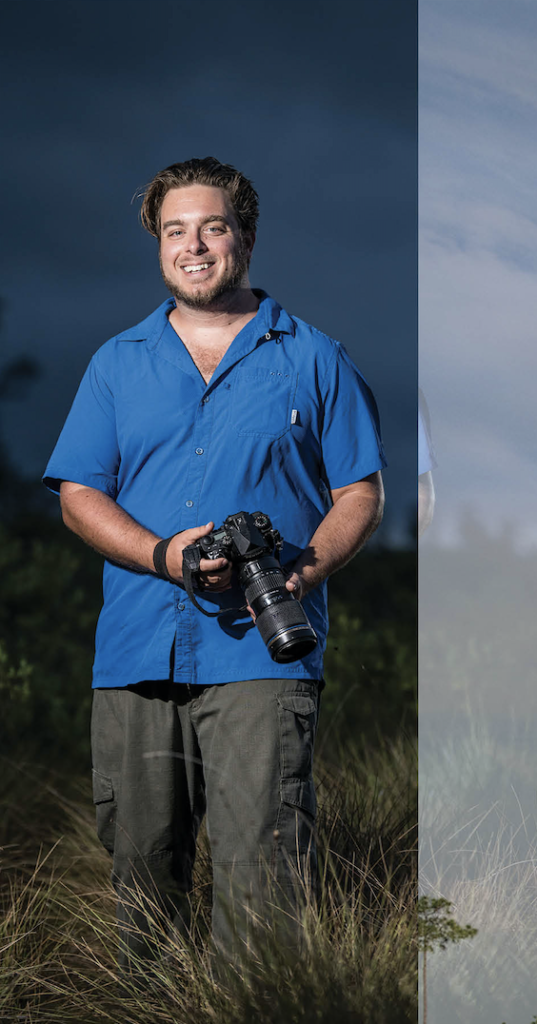 At one of end of the century of conservation work in Florida are folks like Jack and Liz Hailman. Their photos were taken in 2015, just a year before Jack passed away. “That makes it even more special,” Liz said.

Jack was a well-respected professor of zoology at the University of Wisconsin. In 1970, as part of his research, he began studying scrub-jays at Archbold. “He just loved the outdoors,” said Liz, who described both her husband and herself as naturalists. In 2000, the couple retired and moved to Florida to more regularly don their binoculars, clipboard, and walkie talkie (the same ones seen in their photos) for the monthly Florida scrub-jay census.

“We could get twice as much done because there were two of us, especially when you’re trying to find those birds and identify them by their color bands,” Liz recalled.

Jack was always interested in bird behavior and bird communication. He worked with another intelligent bird species up north: the chickadee. But Liz described the scrub-jay census as “the highlight of our lives, in a sense.”

“We were working with such a great group of people at Archbold, and we were able to contribute to the body of knowledge.”  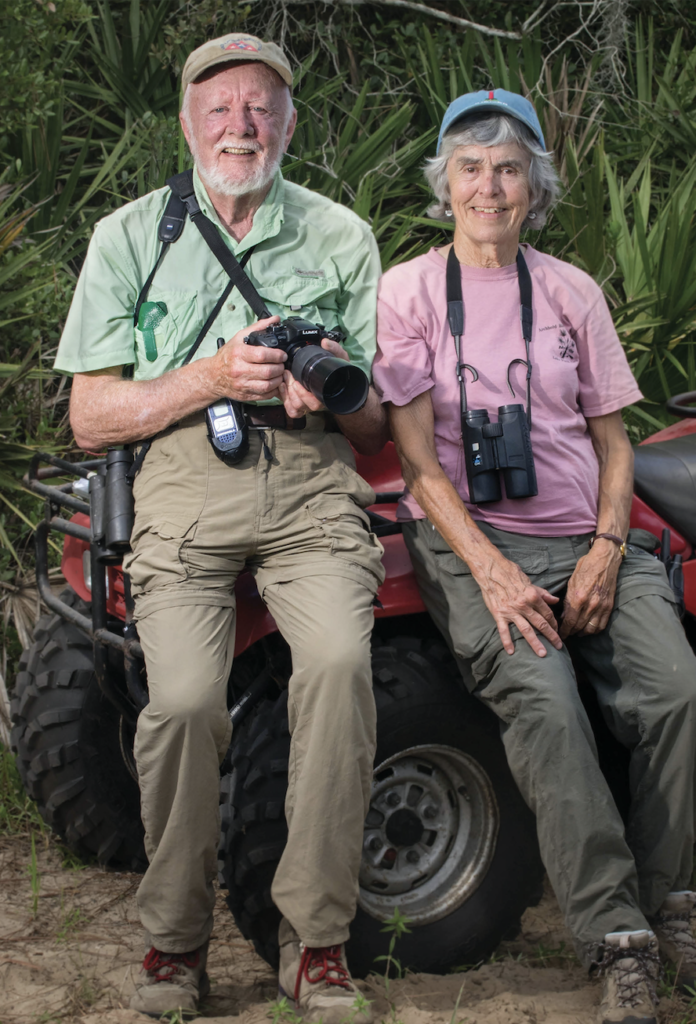 At the other end of the timeline is Alexis “AJ” Jackson, a graduate student and former Archbold intern, whose photo is the 100th in the series. Between Hailman’s efforts that began in 1970 and the time AJ can presumably retire, an entire century of work will be represented.

AJ’s energy and personality shine through in her portrait as she sports a compass and field notebook. She is also featured in one of Dustin’s videos on his website, an expansion of the Florida Stewards project, talking about how she got into working with wetlands.

“I kind of just took a risk. I knew that I wanted something different, and I wanted to do something that felt like it was important to me. I feel like wetlands were that for me and I feel like research in general was that for me,” AJ said in the video.

AJ had to get outside of her comfort zone because she didn’t know a lot of people who were into environmental science or hiking. “If eight-year-old me saw me she would be so confused. Like how did you do this? How did you get here?”

“It’s a huge privilege to be the person I needed to see when I was younger,” she added. 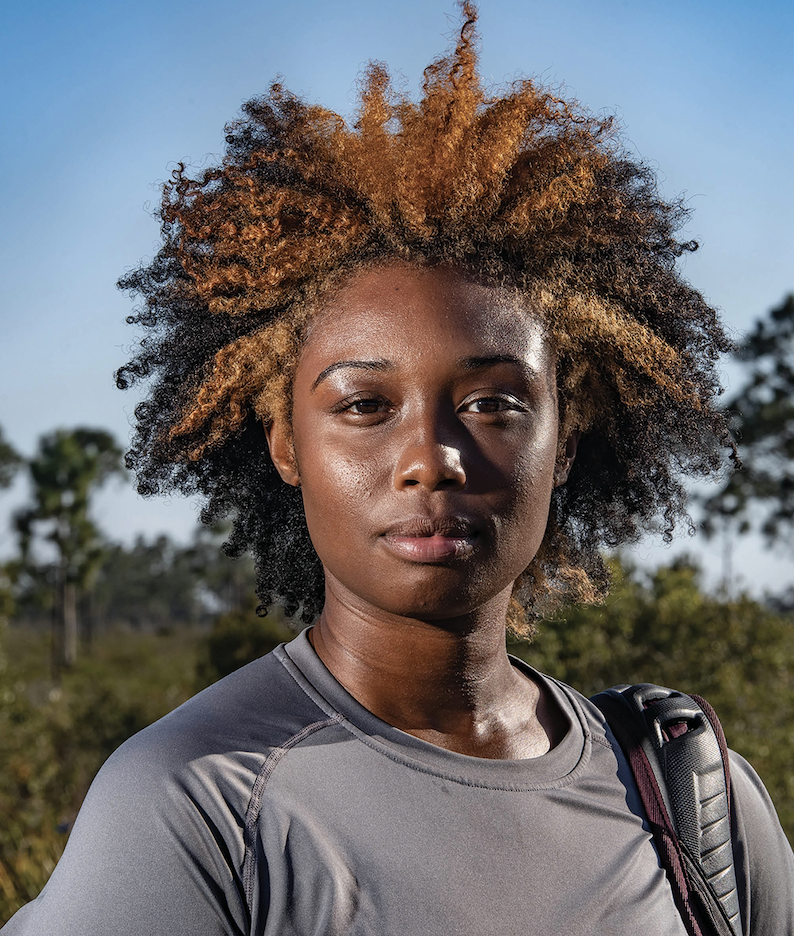 Some of Dustin’s subjects are mid-career, people like Seth Raynor, whose black and white photo looks like a vintage shot upon first view. As you look closer, however, you’ll notice the long, curly locks cascading over his shoulder, and the tattoos.

The photo was taken near the Avon Park Air Force Range. A lichen specialist, Seth is holding a scraper (to collect samples of the odd fungus/algae lifeform) and a field notebook. Dustin noted that photos like this one help to dispel myths about scientists, who might be stereotyped as boring, “nerdy” folks with their noses constantly behind a microscope.

Seth not only helped to expand the lichen species list at Archbold, but when he made an appearance at one Archbold field trip, he was an instant hit with the kids, Dustin recalled. “He made lichen cool.” 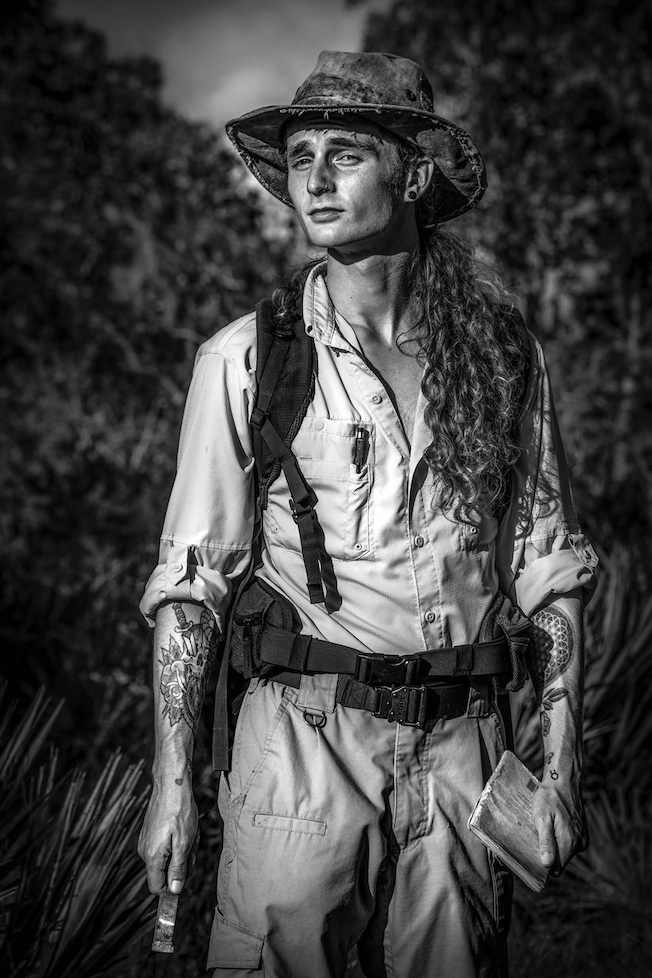 With the Carter Creek wetland for his photo’s backdrop, Archbold research assistant and bonafide “plant guy” Scott Ward grasps a handful of wetland plants and carries a plant press under his arm for preserving them. His photo especially stands out for the brilliant blue sky behind him. It’s the kind of sky you can only get in Florida in the afternoon after a storm, and that’s just what happened.

“A big rainstorm came in and soaked us. We ran back to our cars,” Dustin chuckled. The shoot would have to wait until after the skies had cleared, but luckily, plants are patient.

“Scott is one of the best plant identifiers that we have for this part of Florida,” Dustin said. If you’re looking for someone to identify two different types of grass that most people would need a pocket microscope to tell apart, “he’s that guy.”  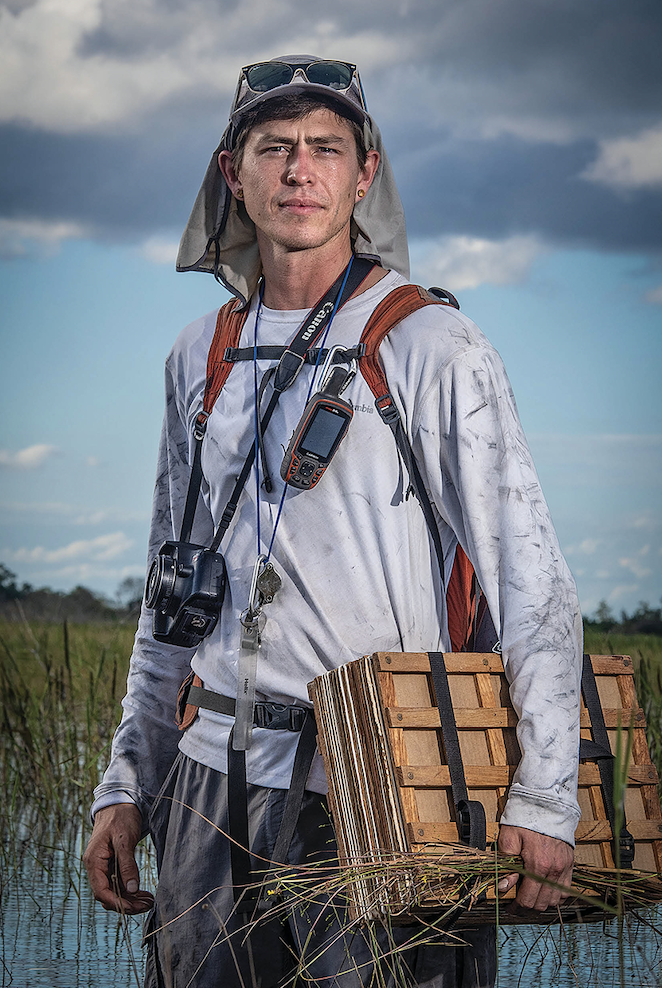 Young Ha Suh, now a pHD student, is seen in her photo holding a CTT Locator and banding box that she uses to tag and track Florida scrub-jays. Outfitting the tiny birds with an even tinier backpack, Young uses the locator to pick up signals showing where the birds go and who they interact with. This is an experiment she co-designed and is running with fellow Florida Steward, Dr. Reed Bowman, Archbold’s Director of the Avian Ecology Research Program.

Young’s hope is that her research will help scientists better understand and protect this endangered bird species. Her participation in the photo shoot has a different goal:

“Scientists are often viewed in a certain way, I wanted to contribute and show that we are a diverse group of people working on various different topics,” she wrote. 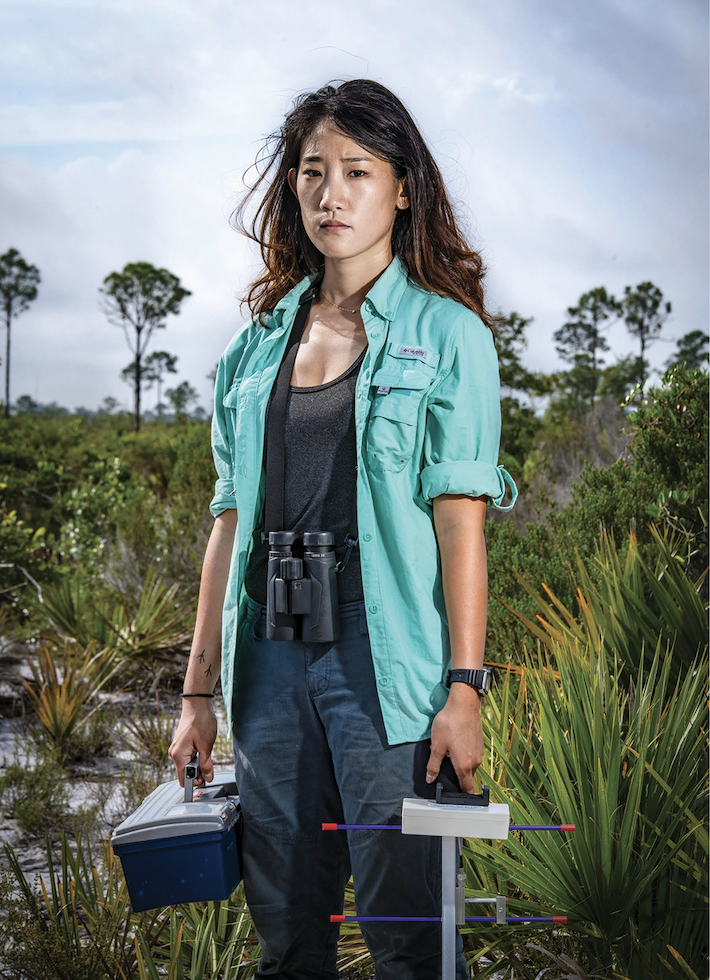 BURNING IT DOWN:  Elysia Dytrych

Originally, state biologist Elysia Dytrych didn’t want to do the photo shoot, but “helping young girls and women realize that there’s nothing stopping them from becoming a burn boss has been really gratifying,” she commented. Her portrait features her toting a drip torch (a souped up gas can used for creating prescribed burns) and a shovel.

“She had just done a burn,” Dustin recalled from the day of the shoot. “The area was still smoking the next day. After you do a burn, you have to go and check it, and so she was also checking it out.”

The other thing to appreciate about this photo, Dustin pointed out, is that Florida is already hot, making a dangerous job even harder. “Imagine you’re standing next to a fire and you are wearing all of that equipment. Those are not breathable materials. It’s rough.” 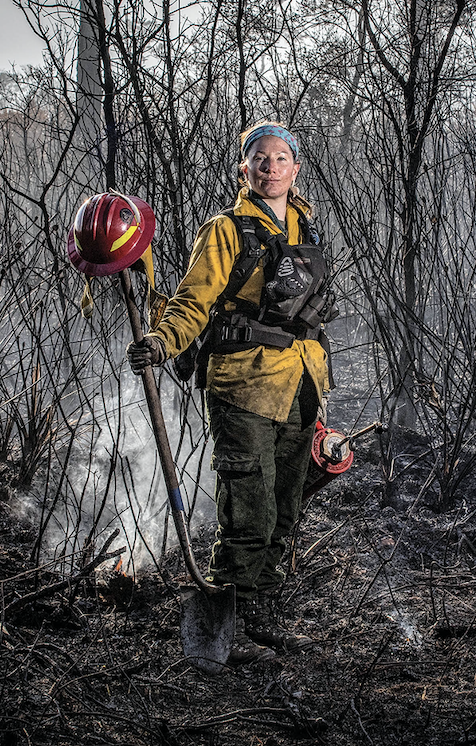 NOT JUST ABOUT THE BIRDS:  Dr. Paul Gray

Dr. Paul Gray, Audubon Florida’s Everglades Science Coordinator, is most well known for his involvement in water management efforts in Florida, especially as it relates to bird populations.

“I used to think I worked on behalf of birdlife, but more and more I realize I work to keep Florida suitable for people. If Florida’s future is not good for birds, it will not be good for humans,” Dr. Gray wrote.

Dustin, however, remembers Dr. Gray best for something else:

“They get to pick their place and he said, ‘We’re going to get in the water in Istokpoga.’ And I said, ‘Are you sure?’ because it is known as a site with a lot of big alligators. We were probably in the water for half an hour.”

Luckily, no gators bothered them, but half an hour is a long time to be wondering if they will.

“Being a photographer itself is an adventure. It’s a passport to visit cool places, meet interesting people, and get behind the scenes,” Dustin said.

Dustin hopes The Florida Stewards project will shine a light on individuals like the ones he has captured, and maybe even change some hearts. So much of science has been politicized, he said. This is a chance to show its human side.

“These are people that are just like you and me and they get their information from boots on the ground. In these portraits, they are looking respectfully towards you. And they are expecting the same level of respect for themselves.”

To see all of the Florida Stewards ongoing project, including photos, videos and VR headset-compatible media, visit www.dustinangell.com.