Since 1970 the Florida Army National Guard 3rd Battalion, 116th Field Artillery has operated out of the Avon Park Armory located at 2500 U.S. 27 South.

The 62,500 pound WWII Howitzer that sits in front of the red brick building may be decommissioned but it remains a symbol of U.S. artillery strength and capability.

“I’ve been here for 23 year.  I can’t tell you how many people we’ve had stop in just to talk because they see our ‘tank,’ said sergeant first class James J.W. Metz, the readiness non-commissioned officer who handles local National Guard operations during the month.

Metz explained, the armament that people describe as a tank is actually an eight-inch self-propelled Howitzer M110.  In battlefield operations the Howitzer was replaced by a highly mobile, lighter weight Multiple Launch Rocket System (MLRS) in 1997.

“We did a three week transition course from the track system to the new wheeled version at Camp Blanding in March,” Metz said of the training provided in Stark, Florida on the new high mobility artillery rocket system.

Metz described the first 15 years of his military service as that of a traditional Guardsman who serves one weekend each month and two weeks annual training (AT) a year.  Eight years ago, he applied for the position of training NCO and then was promoted to readiness NCO.  He is responsible for payroll issues, accounting and deployment readiness for approximately 50 men currently in his unit.

For 375 years, the Army National Guard has been at the beckon call of the state and federal government, providing a first line in emergency responses.  They mobilize to defend Americans within our country or overseas.

During Hurricane Sandy, 61,000 Guardsmen and Guardswomen stood ready to respond to an executive order from their state’s governor or the president to rush disaster relief to the storm battered northeast.

Twenty years ago when Hurricane Andrew left a path of destruction across Southern Florida, the Avon Park unit answered the call for help.  When the 1998 drought brought wildfires that destroyed over 100,000 acres across the state, the 116th was there to help fire fighters.   In 2004 when four hurricanes crossed Central Florida, they ran a distribution point for water, ice and food out of Wauchula.

“We work with local law enforcement and fire units based on the needs of the area,” said Metz.

Whether it is search and rescue, battling wildfires, guarding the borders or fighting in combat missions in foreign lands, when called, the National Guard (www.NationalGuard.com) members do: “What is needed, wherever it is needed.”

In 2005, the 116th was deployed to Iraq as military police security forces.  They are currently readying for another overseas deployment.

“I love serving my country.  Getting up and putting this uniform on every day means something to me,” said Florida National Guard recruiting and retention NCO, sergeant Carlton P. Queen.  He added, “I recruit for two of the batteries in their battalion. It is a privilege for me to work in the community and try to help these kids better their lives.”

Queen’s eight year military career includes time as an infantry soldier, a combat medic, a paratrooper and service with multi-national forces on a peace keeping mission.  For the past four years, he has been a full-time recruiter with an office at the Avon Park Armory.

“We recently had a remodel,” said SFC Metz of the major structural renovation that stated February 15, 2012,  “The contractors did a fantastic job and were ahead of schedule.”

Walking through the facility with its modern, well-equipped kitchen, new walls and flooring, air conditioning and a 5104 sq. ft. auditorium that seats up to 299, it is easy to see why Metz describes it and other improvements made to the unit as, the pride of Bravo Battery.

“We do rent this facility out,” said Metz.  The Armory is available for weddings, birthday parties, meetings, seminars and events.   For information contact Metz at 863-452-3850.

“We also participate in a lot of events per requests,” said Queen of the parades, festivals and annual events, where volunteers act as ambassadors for the Guard.  Metz noted that whether it is a golf tournament fundraiser, a women’s group catering a luncheon or a veteran stopping into the Avon Park facility to reminisce, the local area has been exceptionally supportive of the National Guard.

“No matter where you go, in this uniform you will always get a thank you in this community,” said SFC Metz. 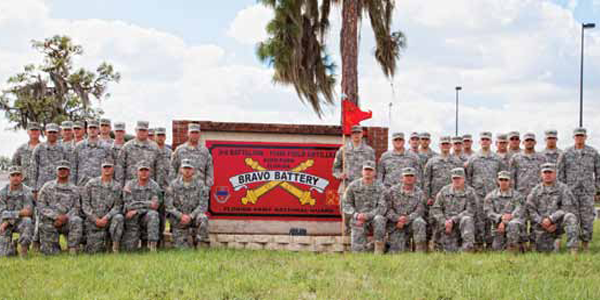 This site uses Akismet to reduce spam. Learn how your comment data is processed.

Get the Latest Issue delivered to your doorstep!  Only $7.75

Any cookies that may not be particularly necessary for the website to function and is used specifically to collect user personal data via analytics, ads, other embedded contents are termed as non-necessary cookies. It is mandatory to procure user consent prior to running these cookies on your website.